Every week, the Cúirt team gets together to discuss and review the latest news and updates in the arts industry. We compile a list of interesting books, movies, podcasts, music, festivals, etc., and we share it with the rest of you! We welcome submissions from all aspects of the arts, so if you would like to be featured as part of Bookmarked, please email info@cuirt.ie or tag us on social media using #Cuirt2021.

Starting off our list is Mexican Gothic, the New York Times bestseller, by Silvia Moreno-Garcia. It is a delicious reimagining of a gothic haunted house novel, perfect for anyone looking for a fantasy-adjacent thriller to transport you to another place. When her cousin Catalina becomes mysteriously ill, Noemí heads to her Victorian hilltop mansion to discover what the cause is and discovers that there is more to the crumbling High Place than is first apparent. This book is like Get Out meets Northanger Abbey and for Jane Austen and Jordan Peele fans alike!

This suggestion might be exciting for all you gaming enthusiasts out there. The full schedule has been announced for the first Fís Games Summit 2021, taking place on Thursday 25th February. The online conference for Irish games professionals will feature renowned speakers like Warren Spector, Brian Fargo, and Sushama Chakraverty. They will also provide various discussions across art, design, programming, funding, and career development, including sessions on funding your game, developing visuals and much more.

Register now for your free ticket HERE. Tickets are limited, so be sure to sign up without delay!

Una Mannion’s suspenseful literary debut merges a classic coming of age tale with a snapshot of a shattered American family dealing with the consequences of one summer evening gone wrong. A Crooked Tree is a unique, memorable novel, both a moving depiction of the transition from childhood to adolescence and a captivating story about the unexpected repercussions of one rash act.

Highly recommended by the Cúirt team if you are looking for a captivating novel to occupy you in the gorgeous Spring sunshine!

Buy it here from Kenny’s: https://www.kennys.ie/results/?q=a+crooked+tree

Seachtain na Gaeilge is back for another week, celebrating our national culture and language from the 1st – 17th March 2021. This year’s fun initiative created by SNAG is Cluichí Gaeilge, available on www.snag.ie. If you are looking to improve your Irish or simply fancy a bit of craic – check out these creative games to practice your ‘cúpla focal’!

There is a complete list of events spanning the duration of the next two weeks. It is definitely worth getting involved, especially if you have an interest in the Irish language.

A huge congratulations is due to the team of A White Horse, a short film included in the longlist for the Academy Awards. Directed by Shaun O’Connor, the story follows a young woman’s life in 1970s Ireland, exploring the use of psychiatric hospitals to contain any person considered to be exhibiting ‘abnormal’ behaviours. O’Connor, a graduate of University College Cork, was motivated to investigate this subject after learning that conversion therapy was common in Ireland in the 1960s and 1970s.

The story of A White Horse is poignant, shocking, and acutely sad. It paints a picture of an Ireland less than fifty years ago, making it truly difficult to comprehend that conversion therapy for homosexuality was a regular occurrence in psychiatric hospitals in the 1970s. It also draws attention to the appalling fact that this practice is still legal in Ireland and the UK in 2021. However, a bill proposed to ban the abhorrent practice is currently working its way through parliament: https://www.oireachtas.ie/en/bills/bill/2018/39/

We hope you enjoyed this week of recommendations! If you would like to be featured on ‘Bookmarked’ please email info@cuirt.ie for consideration. 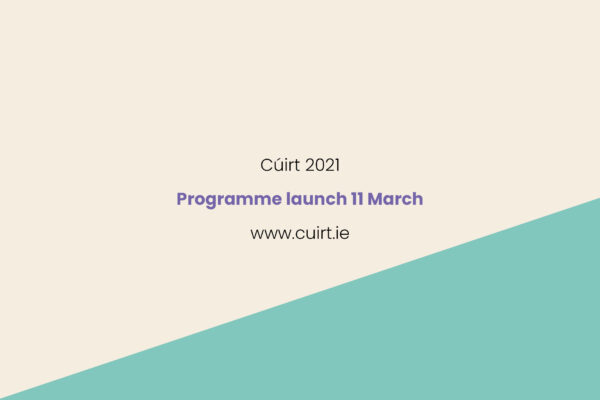